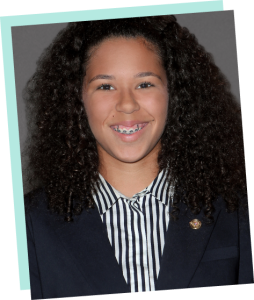 “My Club taught me that a little bit of fear is NOT a sign of weakness… I am not afraid to give 100 percent as the ambassador for our military youth.”

Arianna has moved every four years to a new military installation. Whether living in Germany or Japan, Arianna found a home at her Boys & Girls Clubs of America-affiliated Youth Center. When Arianna learned she was moving back to the United States, she was nervous about starting over again.

As soon as she walked into the Club, Arianna felt relief wash over her. She was greeted by warm, welcoming faces, and even a familiar one. The Club’s CEO had been stationed in Tokyo at the same time as Arianna’s family, and he had known her since she was a little girl. For military youth, change is a constant. Yet with Clubs located on U.S. military installations worldwide, these kids and teens are able to form important relationships, and in Arianna’s case, even have the chance to reconnect with old friends.

Arianna’s Club involvement has shaped her into a well-rounded young adult with strong leadership skills. She participates in programs like Career Launch, Money Matters, diplomas2Degrees, and even serves on the Air Force Teen Council. Arianna plans to attend the Air Force Academy after she graduates from high school in 2019. She intends to become a fighter pilot or intelligence officer.