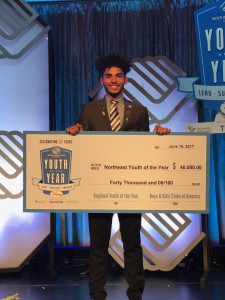 “My philosophy is that leadership means service,” Polanco said. “My desire is to lead by serving others will continue to be the hallmark of my character.”

Born in the Dominican Republic, Polanco remembers waking up to wonder whether he had electricity and the ability to shower before heading into school each morning. After he got dressed every day, his mother would drill Polanco on multiplication tables. His mom was determined for Polanco to be the first in his family to attend college. Today, Polanco is preparing to head to Dartmouth College in the fall.

Polanco prides himself not just on academic achievement, but also on his civic engagement. He helped found the Clifton Student Union, which is completely student run, student led and student oriented. To solve the problem of students leaving the district to receive vocational education, and taking with them direly needed funding, Polanco researched how his school district could obtain such a program. He spent countless hours each night researching education laws and specific vocational programs. After producing a comprehensive report, he presented to the Board of Education commissioners and the school administration. Today, the district has added classes for those pursuing nursing, criminal justice and culinary careers.

“Today’s youth are often left out of conversations directly regarding them: specifically, conversations about their education,” Polanco said. “A youth movement which is organized, mobilized and determined to bring about positive change through civic engagement will be the youth movement I help bring to fruition.”

Polanco first joined the Boys & Girls Club of Clifton after waiting to pick up his little sister from the Club’s Kinderkare program. He quickly immersed himself in the Club as a mentor and role model for young Club members. He wants the kids to dream big and know that anything is possible.

“If they see that someone like themselves, who overcame similar obstacles, who broke barriers, can be Youth of the Year, they too will envision themselves where I stand,” Polanco said.

Polanco will attend Dartmouth College this fall and hopes to one day become a Supreme Court Justice.

In September, Polanco will travel to Washington D.C. to vie for the National Youth of the Year title, which comes with an additional $100,000 scholarship and the opportunity to serve as a spokesperson for Boys & Girls Clubs of America representing four million Club kids and teens. If selected, Polanco hopes to use his voice and platform to promote civic engagement.

The Youth of the Year recognition program is presented by The Walt Disney Company, who has supported Boys & Girls Clubs of America for more than 50 years, empowering young people to reach their full potential and providing youth with access to the tools they need to build the great futures they imagine. Toyota, Signature Sponsor of Youth of the Year, is dedicated to inspiring the next generations of engineers, thinkers and leaders who will help drive the American economy. Additional support is provided by University of Phoenix, a committed partner who has worked with Boys & Girls Clubs of America on many Academic Success initiatives, and the Taco Bell Foundation, Boys & Girls Clubs of America’s premier partner for teen empowerment.